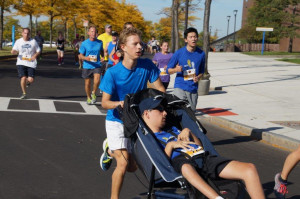 Hometown: Buffalo, NY
Disability: Cerebral Palsy
Hobbies: Honorary member of Union Fire Co in West Seneca and an assistant trustee, loves going to Bruce Springsteen concerts (6 and counting), a fan of the Buffalo Sabres.
Why Do you want to be in a 5-K race?  Mom and Dad both participate in races so often Matt would have to stay home with someone because he couldn’t be left alone while we ran. On occasion, we would be able to bring him if we had a non-running friend willing to stay with him until the finish. He always enjoyed being around the crowd and socializing. He was beyond excited when he was offered the opportunity to actually participate instead of watching and waiting.  He spends too much of his life waiting!
How did you feel about your first 5-K race? His first race was thrilling for him! His Dad, Mom, aunt and several friends, old and brand new, surrounded him and ran in a group together! He was cheered and high-fived by enthusiastic bystanders. His sister and more friends waited at the finish- this time, they waited for him! He has pictures from his sister that he still looks at and shows me.