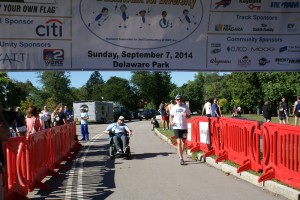 Name: BJ Stasio
Hometown: Buffalo New York
Disability: Cerebral Palsy
Hobbies: I enjoy watching Boston Red Sox baseball, NASCAR. Sometimes I consider advocating a hobby, if it’s outside of work and I’m not getting paid.
Why do you want to be in a 5k  race?
The reason why I wanted to be in 5k races was a simple one for me. I was tired of this feeling of exclusion that I had in my gut. I felt something needed to change.
How did you feel after your 1st race?
My first race with the Heritage Centers race and it was interesting to see the race not from the sidelines but to actually participate in it. Now, I can say I was a part of something instead of being a cheerleader. It was an exhilarating experience. I’m looking forward to participating in future races. I would like to thank all the members of RACIN! for helping all those with disabilities to see that life doesn’t have to happen within a box. You are allowed to and should whenever possible stress that box or even break that box. I have one final thought for everyone who is reading this don’t be afraid of the “what if’s”. 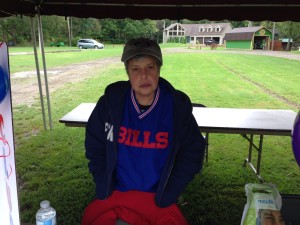 Name: Luanne Fricano
Hometown: North Collins New York
Why do you want to be in a 5k  race?
I volunteer because it’s fun and it get’s me out of the house.  I like the people at RACIN’.  They’re nice people and they treat me like family
How did you feel after your 1st race? After volunteering my first race, I felt good.  They are nice people to share the time with. 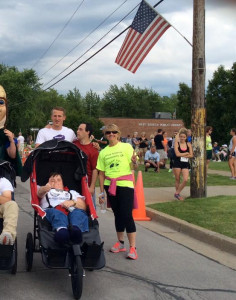 Name: Gwen M. Squire
Hometown: Blasdell, NY
Disability: Spina Bifida
Hobbies: Jigsaw puzzles, reading, advocating for others who don’t know how to or can’t do it themselves.
Why Do you want to be in a 5-K race?  I like feeling as if I am included and not excluded, because of my disability!
How did you feel about your first 5-K race? – It was exhilarating and gave me a sense of accomplishment and a sense of being part of the community!

Name: Matt Warner
Hometown: Buffalo, NY
Disability: Cerebral Palsy
Hobbies: Honorary member of Union Fire Co in West Seneca and an assistant trustee, loves going to Bruce Springsteen concerts (6 and counting), a fan of the Buffalo Sabres.
Why Do you want to be in a 5-K race?  Mom and Dad both participate in races so often Matt would have to stay home with someone because he couldn’t be left alone while we ran. On occasion, we would be able to bring him if we had a non-running friend willing to stay with him until the finish. He always enjoyed being around the crowd and socializing. He was beyond excited when he was offered the opportunity to actually participate instead of watching and waiting.  He spends too much of his life waiting!
How did you feel about your first 5-K race? His first race was thrilling for him! His Dad, Mom, aunt and several friends, old and brand new, surrounded him and ran in a group together! He was cheered and high-fived by enthusiastic bystanders. His sister and more friends waited at the finish- this time, they waited for him! He has pictures from his sister that he still looks at and shows me.